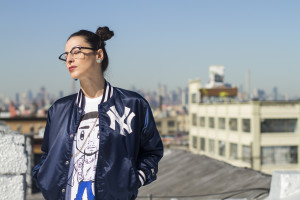 Her career pursuits as a filmmaker brought her to New York City where she currently lives and produces music videos, fashion editorial videos, documentaries and commercials. In 2013 she opened a space for artistic expression and performance called “Exit Room”. The unconventional gallery hosted and supported artists from all over the world and enjoyed a following of art critiques, art buyers and journalists who always promoted and reviewed her unique projects . In 2017 she started her project “Womxn to The Front“, providing a platform for womxn film makers, visual artists and musicians; supporting gender equality with such tremendous impact.  Zoe has produced more than 20 exhibitions and an impressive number of videos and musical performances. She curates events and gatherings to raise awareness on social justice with recurring themes of diversity and racial equality in American culture. Zoe amplifies cultural narratives through the arts and film and connects individuals to the people, and resources they need to create a better future for themselves.